The International Labor Organization (ILO) describes child labor as “work that deprives children of their childhood, their potential and their dignity, and that is harmful to physical and mental development.” It is not all work done by children is child labor. It is only such work as is unsafe or damaging to the physical, social or moral aspects of the child or those that affect their education and development that are considered as child labor.

The United Nations Children’s Fund (UNICEF) estimates that about 158 million children between the ages of 5 and 14 are engaged in child labor all over the world, a large majority of who belong to the Sub-Saharan African countries. The UNICEF also points out that one in three children in this region work for their living.

It is widely observed that there is a strong link between poverty and child labor. When

the family needs to send children to work because of poverty, their education suffers and ultimately the family’s upward mobility in the ranks of the community is also at stake. Thus child labor causes a vicious circle that is a struggle to come out of without the aid of the government and the society. Many of the countries in Africa report tens of thousands of children employed in child labor in agriculture, mining and other hazardous occupations. In some African and Asian countries children are also abducted and forced into child labor including prostitution and the revolutionary army cadres.

Although child labor as indentured servitude and child slavery has existed in the developed countries for centuries, it became widespread at the beginning of the industrial revolution and is still a problem today. It is estimated that there are 59,600 workers in U.S under the age of fourteen. 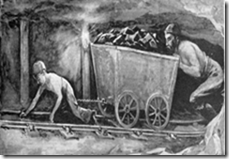 The child workers are preferred by the employers as they are cheaper, more manageable and have fewer tendencies to go on strikes or demand increased wages. Children were employed in large numbers in mines, glass factories, textiles, agriculture, canneries, home industries, and also worked as newsboys, messengers, bootblacks, and peddlers. Children as young as six were forced to work twelve to nineteen hours a day with only an hour’s break in-between. Not only were the wages pitiful, some children like orphans were not paid at all in lieu of their board and lodging. However, by the year 1900, most of the northern states of the U.S. became aware of this atrocity of child labor and some legislation was made against child labor.

The reforms in child labor were first brought in by social reformers, and by societies such as the state consumers’ Leagues and the working Women’s Societies. These led to the formation of the National Consumer League in 1899 and in 1904, the National Child Labor Committee. The National Child Labor committee was able to pass the Fair Labor Standards Act in 1938, thus setting federal standards for child labor, including the compulsory free education for all children.

Child Labor is sometimes the topic for college essays. Some other topics are not so easy for writing essays. However, our essay writers can write papers on whatever topic you choose. Our paper writing service can also help you edit essays you have written.