Conflicts are caused when there is a disagreement between people and each side perceives a threat to its needs, interests and concerns as a consequence. Conflicts cover a wide range situations from the domestic disputes, to political conflicts to even war. Hence, conflict resolution can be stated as the approaches and practices involved in smoothing over the social conflict and bringing it to a peaceful ending.

The ways in which people carry out conflict resolution can be categorized into five styles: avoidant, accommodating, combative or competitive, compromising and collaborative. By understanding each style of conflict resolution and its imports, one can regulate the results of one’s behavior under different conditions. 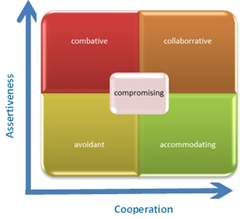 Avoidant:This is seen when one side involved tries to avoid conflict by not communicating the preferences, wishes or thoughts regarding the subject. However, the avoidance of the conflict does not resolve the conflict. Instead, there are unexpressed views, stifled feelings that could erupt abnormally at an unexpected time. The conflict doesn’t go away. Instead it only develops more intensity as there is no release of pressure by communication. The other people involved in the conflict are misled by the avoidance and are later surprised at the worsening of the relationship. Avoidant behavior is the reflection of the poor cooperative and low assertive character of the person.

Accommodating: Another way to avoid conflict is to not only by avoiding confrontation but also by accepting the others’ preferences and concerns in place of one’s own. In this way, the others dominate. This is seen in high cooperative and low assertive people. Accommodating conflict resolution is predominantly noticed in people who consider the relationship as being more important than their own needs and preferences. They also avoid competition. The conflict resolution here is a lose/win situation where the person loses his standing and the other person wins.

Combative: Conflict resolution through the combative style would mean that the person needs to be dominant, with no desire to accommodate other’s views or preferences and make no concessions or accept any type of condition. Such people are observed to be highly assertive and low in cooperation. This is the opposite of the accommodating type and results in a win/lose situation. Highly competitive people, aggressive communication style and low regard for relationships are the hallmark of the combative type of person.

Compromising: In this style of conflict resolution, both the parties to the conflicting situation are ready to concede some importance to the others views, without giving up their own. The people involved in a compromising resolution may not be completely satisfied with the results, but are ready to give certain concessions to the others’ point of view. Here, the cooperative as well as the assertive behaviors are of the middle range.

Collaborative: The two sided involved in collaborative conflict resolution are both much interested in trying to please the other, but at the same time asserting their own needs and preferences. This is called a win/win situation as both the parties to the conflict obtain mutual benefit. High cooperation and high assertiveness are the qualities seen in this style of conflict resolution. Collaboration can lead everyone towards the common goal and success.

Students of Management and  Human Psychology know the importance of different behaviors and communication styles. Creative writing has to appeal to the exact psychological factors to get the expected response. College essays on such topics are available from our essay writing service. Just click on the link to get paper writing service on this and other subjects. Writing essays to fetch you high grades is our credo.