It has been calculated that approximately 17% (or 12.5 million) of children and 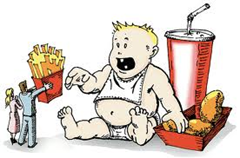 adolescents aged 2—19 years suffer from childhood obesity and the worrying factor in this scenario is that since 1980, obesity prevalence among children and adolescents has more than tripled. In the past, a fat child was appreciated and blessed because at that time,

it meant a healthy child, not an undernourished one and also more likely to endure childhood infections and diseases. However, excessive fatness or childhood obesity has now become one of the most worrying among the primary childhood health problems in both, the developed countries and to a certain extent, in the less developed countries as well.

According to the CDC (Centre for the Disease Control and Prevention), the measurement of childhood obesity is calculated on the body mass index (BMI) using a child’s weight and height. In this calculation, children falling in the 85 to 95 percentile are considered to be overweight, while those above the 95 percentile are considered obese. These calculations are based on groups of children belonging to the same age and sex, as they would differ in different age groups as well as among the boys and girls. However studies have shown that the distribution of body mass index (BMI) has changed in such a lopsided way that the heaviest children, who are at greatest risk for further health problems, have turned even heavier.

Childhood obesity causes a wide range of serious problems during childhood while increasing the risk of premature disorders and death. The main problems that are seen in children with childhood obesity are: Type 2 diabetes; macro-vascular problems leading to complications like heart disease, stroke, or amputations; micro-vascular problems that could lead to kidney failure, or blindness; recurrent pulmonary problems including sleep disordered breathing or sleep apnoea, asthma, exercise intolerance, as well as severe hepatic, renal, musculoskeletal, and neurological complications. 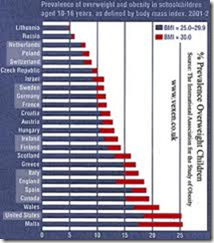 The poor in the urban areas in developed countries are observed to be especially at risk for childhood obesity due to their lack of proper nutrition and the inadequate physical activity. On the other hand, childhood obesity is observed more often in the upper socioeconomic levels of developing nations, where the embracing a Western lifestyle is prevalent. Because of this there is the occurrence of both over nutrition and under nutrition. The rapid spread of childhood obesity can be considered an epidemic among the genetically stable people and can be mainly credited to unfavorable environmental reasons for which direct solutions are present.

Childhood obesity and its harmful health effects are topics usually researched by science students. Writing essays, or writing a term paper on such a subject is easy now and just a click away. Visit our essay writing service and see how you can get an essay writing expert for your chosen topics.