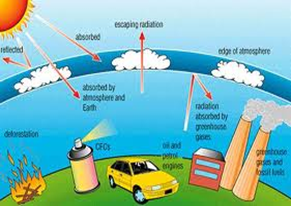 Greenhouse gases are those gases in the earth’s atmosphere that trap the heat from getting escape back into space and, instead, reflect it back to the surface of the earth. As they produce a greenhouse effect in trapping the heat, they are called greenhouse gases. Greenhouse gases consist of gases such as carbon dioxide, ozone, water vapor, methane, nitrous oxide, chlorofluorocarbons, sulphur hexafluoride and other fluorinated gases.

The greenhouse gases form a layer in the atmosphere that allows the entry of sunlight but prevents it from escaping back into space. This happens because of the tendency of these gases to absorb and emit long wave or infrared radiation. Out of the total amount of sunlight falling on the surface of the earth, forty per cent is reflected back from the earth. The greenhouse gases absorb seventy-five per cent of this heat. They emit this heat in a multidirectional manner and about fifty per cent gets reflected back to the earth’s surface. The radiation turns into heat energy and warms the earth’s surface and the lower atmosphere.

The concentrations of the greenhouse gases have increased steadily since the beginning of the industrial revolution and the rise in the smoke content of the air. Similarly, the fossil fuel combustion in vehicles and heating purposes, change in the use of land with more buildings and less plant cover, intensive agricultural methods, increase in the populations of humans and the farmed animals are all causes for the increase of the greenhouse gases in the earth’s atmosphere.

Let us study how these greenhouse gases are produced:

Methane and nitrous oxide are produced during the production and transport of coal, natural gas, and oil. Methane is also emitted by livestock, agricultural procedures and from the decaying organic material in waste dumps and landfills.

The effect of the greenhouse gases on the global climate in the long-term is difficult to predict as there are still many things that we have to learn about them. However, it would be wise to curtail the emission of these greenhouse gases before any further problems arise. Increased energy efficiency, Carbon Capture and Storage (CSCs) technologies, research in ruminant feeds to reduce methane output improved land management and crop varieties are the need of the hour to reduce the emission of greenhouse gases.

Greenhouse gases and their effect on global warming and climate change are topics usually researched by science students. Writing essays, or writing a term paper on such subjects are easy now and just a click away. Visit our essay writing service page and see how you can get paper help on your chosen topics.